A few days ago, I was watching a reality TV show about a father of two who was trying to move on from the death of his father and get his life back together.

Steps ranged from the significant remodeling of his home to things as mundane as getting a new haircut and taking cooking lessons. At the end of all of that, a close friend presented him with a quilt that was made from some of his father’s clothing (which had taken up majority of his closet space).

What an extraordinary, thoughtful and practical gift!

The significance of quilts is something that’s renown in our country’s history. In fact, a recent edition of The Book talks about the Bible Quilt, which is on display at the Smithsonian (the world’s largest museum):

“It was made by Harriet Powers, an African-American farm woman from Clarke County, Georgia, and first exhibited at the Athens Cotton Fair in 1886. An artistically created quilt, it has been admired over the decades of its history. Harriet Powers, born a slave and thought by many to be an illiterate woman, was, in fact, quite literate. In a discovered letter she’d written, she tells of learning to read “with the help of the family’s children.” She continued to read and study on her own, resulting in the exquisite quilt blocks she created depicting 15 major scenes from the Bible taken from her own study of it.” 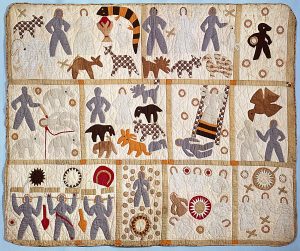 Can you identify the scenes!? Email us and let us know!

Whether it’s quilts or hundreds of other elements in culture, The Book reminds us that the Bible really is everywhere!