Growing up in the early 60’s, Fidel Castro and the country of Cuba represented an ever-present sword of Damocles at the throat of the United States.  The heyday of Bautista’s rule was a distant memory.  Thousands of Cubans fled to the US and elsewhere to avoid the brutal hand of Che and Fidel.  The evil empire (Soviet Union) had successfully extended its reach to the western hemisphere through their revolutionary Caribbean proxy just 90 miles away.

The Soviet Union planted hundreds of missiles, many with the potential of striking Washington, DC.  Of course, that’s the story of the Bay of Pigs and then the Cuban Missile crisis.  Bret Baier does an excellent job of describing that time in his book, “Three Days in January: Dwight Eisenhower’s Final Mission.”

With the imminent threat of a nuclear attack from our island neighbor, “Stop, Drop and Cover” drills were a regularly scheduled part of my elementary school life.  At least once each month, the exercises were a vivid reminder that our lives were in constant peril. Who knew what the Soviets would do, much less Castro who had just overthrown the Cuban government.

The stop, drop and cover technique was designed to make us believe a nuclear attack was actually survivable. The thought was, since light energy travels faster than the energy released from an atomic blast, as soon as we saw a blinding light flash in the sky, we could hit the ground and cover. 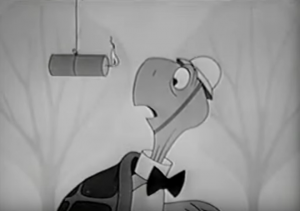 In 1951, civil defense films, like the one featuring Burt the Turtle,  helped us prepare for that doomsday.  Fifty years later, I still vividly remember those corny movies.  It was one of many (what seem now to be hokey) propaganda films which speak more to the culture of the day than to actually produce any effective outcome.  (In all reality, the best outcome was being thrilled that any film was scheduled for the day, a nice relief from a boring classroom lesson.)

Recently I realized how ludicrous it was to “stop, drop and cover.”  In the book, “Killing the Rising Sun: How America Vanquished World War II Japan,” the author reported the unfathomable energy released by 1945-era atomic bombs.  For example, the Hiroshima fireball was 1,200 feet in diameter and had a temperature of 10,830 °F.  (That’s the temperature of the sun’s surface.)  Frankly, the slogan should have been, “Stop, Drop and Vaporize” just as many Japanese citizens were.

The Hiroshima bomb detonated about 1,900 feet above the city.  Thousands were instantly vaporized.  Something in the order of 70,000–80,000 people were killed by the blast or resulting firestorm and another 70,000 injured.  More than four square miles of the industrial city were destroyed.

All that to say, my view of Cuba has always been deeply colored by those early bomb-threatened years regardless of the actual likelihood of an unprovoked nuclear attack.

More recently, as news of US policy changes toward Cuba have become more frequent, my interest in seeing the country first-hand increased dramatically.  Since Fidel passed, there’s a certain “Wizard-of-Oz-ian” sense of “Ding Dong, the witch is dead” sense.  Shoot, if cruise ships can begin service to the island, how bad could it be?

And that gave rise to a bunch of questions:  How will Cuba change at the hand of Raul?  Then what happens when he’s gone?  How has Cuba been affected in the last 30 years by the loss of Iron Curtain support?  Is there more to Havana than cigars and 50’s era cars?  What’s the status of the Christian church?  How free are the people to speak?

Well I recently traveled to Cuba with a group which included my daughter Katie, Charles Morris of Haven, several Haven board members and men from USA Teams who install water filtration systems. 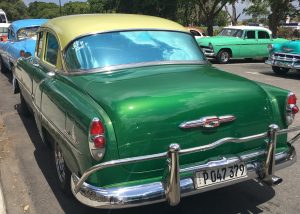 The colorful buildings and 50’s era cars are quite a site.  At every turn these classic cars light up the streets of Havana.  Yet, while on the outside they’re gleaming, on the inside, the engine is a Japanese diesel motor, a far sight from the grand old V-8’s.

Cigars must still be high on the export list.  I found it fascinating to tour a cigar manufacturing plant.  Frankly, it feels a bit like a sweat shop, each cigar being crafted by hand.  In the “assembly” room, the traditional “reader” sits at the head of dozens of tables projecting the latest novella into a loudspeaker for the crew.

As it relates to the church, I had presumed that the heel of socialism (“Fidelism”) was firmly strangling the neck of the church.  But that’s not true.  The fact is that the evangelical church is flourishing.  There are seminaries for many denominations in Cuba with national—even international—influence.  Classes there are filled with pastors coming from all over the world, anxious to be deployed.

Through those dark years, Castro chose to partially recognize the church.  He allowed churches which pre-existed the revolution to remain.  There was a remnant who survived through very difficult times.  And now, they’re enjoying the fruit of their diligence.  Churches are now growing rapidly.  That’s the good news.

The bad news is that Cuba is nearly like a third world country, much to my surprise.  Infrastructure has slowly decayed.  Without Soviet support so mention services we take for granted are lacking or have deteriorated to the point of being unusable.  Food is also in short supply.  So is clean, potable water in many areas.

Our travel friends (USA Teams) are making a point of supplying local churches with high capacity water filters so that the church is a neighborhood hub, providing free, clean and safe drinking water to the community.

But perhaps an even greater need is not the water itself, but the living water that Jesus promised to the woman at the well (John 4:14).  God’s word, in the hands of Cuban believers, provides a wellspring of hope and encouragement.  We saw that!

Just a few years ago, after a trip to Cuba, Charles also observed this thirst.  He thought that raising 10,000 Bibles would be a big goal for listeners to the broadcast.  But can you imagine the surprise and delight to subsequently have Haven listeners donate nearly 140,000 Bibles!  And that need continues.

No doubt, Charles and team will return to Cuba.  That’s likely to be in person and via the Trans World Radio airwaves which broadcast from Bonaire.  Their 400,000-watt transmitter will most certain cover the entire country of Cuba as well as much of the southern United States.

National Christian Cuban leaders confirmed both the need and the desire to hear Haven in Cuba.  God willing, that will happen starting the first of the year.  And also, the Lord willing, Haven listeners will help deliver thousands more Bibles to Cuban believers.  We know, they know, with the Bible in hand, that it’s all about Jesus!