It’s impossible to miss the tributes coming from both sides of the aisle for Senator John McCain.  Rightly so.  This American servant and hero has been revered for his unswayable service to the country and his all-the-cards-on-the-table truth speaking.  He was deeply principled and had a profound sense of duty.

President George W. Bush pointed out that John McCain “Was a man of deep conviction and a patriot of the highest order.”  He went on to say, “Some lives are so vivid, it is difficult to imagine them ended.  Some voices are so vibrant, it is hard to think of them stilled.” 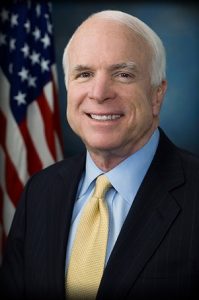 What fascinates me most about McCain’s life is not:

What fascinates me most about this American hero is the change in his life which was forged through the crucible of 5½ years at the Hanoi Hilton.  Torture, pain, isolation, broken bones, beatings, starvation, mistreatment—these were all de rigueur.  And in some measure, this unthinkable punishment was a result of his desire to not receive preferential treatment which would have left his comrades behind.

By most accounts (including his own), John McCain’s life was one of two major periods and personalities: there’s the pre-Vietnam Top Gun hotshot pilot and playboy, and there’s the post-Vietnam stalwart of his family and his country.

In his memoir Faith of My Fathers, McCain wrote: “In prison, I fell in love with my country.  I had loved her before then, but like most young people, my affection was little more than a simple appreciation for the comforts and privileges most Americans enjoyed and took for granted.  It wasn’t until I had lost America for a time that I realized how much I loved her.”

The Bible talks about the effects of testing:

“Consider it all joy, my brethren, when you encounter various trials, knowing that the testing of your faith produces endurance.  And let endurance have its perfect result, so that you may be perfect and complete, lacking in nothing.”     (James 1:2-4)

It’s never painless when the dross of sinful living is skimmed from your life.  But in the end, it’s worth the process.  Ask dear Joni Eareckson Tada:  “I’d rather be in this wheelchair knowing God than on my feet without Him.”

John McCain survived the trial with a strong sense for what’s right—for him and the country.  The pain distilled the most important things…leaving behind the dross.

And so it works for you and me as believers.

The divine Metallurgist carefully heats the fire of our lives to a temperature that is just at the point of melting away debris, but not destroying our mettle.

“No temptation has overtaken you but such as is common to man; and God is faithful, who will not allow you to be tempted beyond what you are able, but with the temptation will provide the way of escape also, so that you will be able to endure it.”     (I Cor. 10:13)

You may feel like you’re stuck in the Hanoi Hilton.  You may be discouraged, lonely, rejected and a prisoner of some circumstance with no end in sight.  But the Lord knows!  That’s why we depend on Him.  Why we trust His divine plan.

And that’s the very same reminder you’ll hear on Haven Today.  Charles and Janet Morris spoke about their own cauldron when their son overdosed.  There are few more painful trials than the loss of a child.  And yet they found hope.  Their son was “rescued by death” from his painful circumstance.

You get that perspective when you realize, this life . . . it all . . . is about Jesus.  Our hope.  Our help. Our focus every day on Haven Today.