Focus on the Family is launching auditions across America to find the next Adventures in Odyssey voice.  Kids 6 to 15 can audition for a chance to win a trip for four to the Bahamas during the Focus on the Family 40th Anniversary Cruise in November 2017!  During the cruise, the grand prize winner will perform live with Adventures in Odyssey actors during the 30th Birthday Live Show.

The Audition Kit will be available May 1 at whitsend.org/getintheshow and submissions will be accepted June 1-16, 2017.  For more information, check out the official contest rules.

In 2012, the contest drew over 5,000 entries and 240 made a decision for Christ!  A young girl named Shona became the 2012 Grand Prize Winner and was featured in Album 57, “A Call to Something More.”  She continues to play the role of Jules Kendall today!

Christian radio is invited to help spread the word to kids ages 6 to 15 that now is their chance to Get in the Show!  Here’s what’s available:

Participating stations who request on-air giveaways will be entered to win the Grand Prize – a complete Adventures in Odyssey album library ($1,500 value)!

For more information on the contest and radio promotion, please contact Katie Burke. 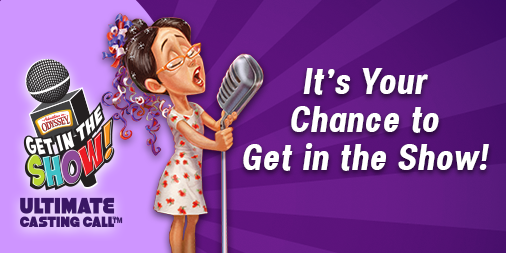