“The providence of God is an intimate and benevolent care for those He loves.”

While many of us gathered at a recent NRB convention meeting in Anaheim, Mark MacArthur shared this puritan quote as he accepted an award on behalf of his father, John MacArthur.

Just weeks prior, John himself was scheduled to attend NRB–give the message at the Worship service, greet station partners at a ministry-hosted event, and attend a few private meetings.  Unfortunately, he contracted a throat infection and was unable to attend any events that week.  Many radio partners were looking forward to celebrating with Grace to You and John MacArthur on their 50th anniversary.  It would also be fair to say many of us (me included) were disappointed to hear John would not be there.  So, to have Mark, his son, stop by unexpectedly at this station meeting, and in time to accept an award for John was, well, providential.

And that seemed to be the underlying theme in many of my conversations with stations throughout the convention week, underscoring what Mark had so eloquently noted about God’s intimate and benevolent care in the lives of His children.  For that reason, this was by far my favorite NRB.  And to prove it, below are pictures of some special friends who themselves have experienced God’s providence in their own lives! 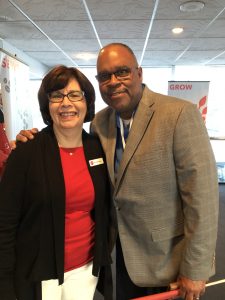 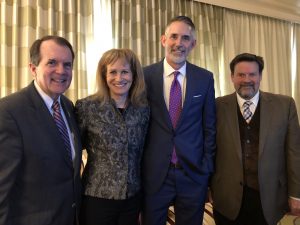 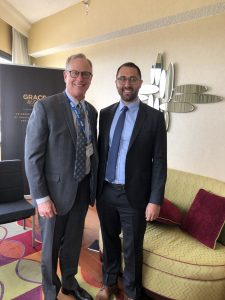 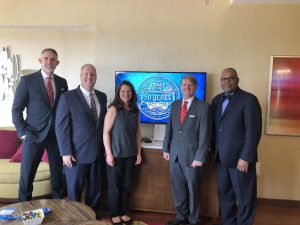 Now with Resurrection Sunday coming up on April 21, we hope you and your audience have been tuning into “Grace to You” for John MacArthur’s series titled, Jesus on Trial.  I’ve been listening on my commute into work each day and have been reminded of just how much Jesus endured in His final days … from the betrayal of Judas to the unjust trial, to the scourging and ultimately His horrific crucifixion … all so that we can experience eternal life.  Humbling, to say the least.  Starting next week,  John turns our attention toward The Empty Tomb, particularly the significance of Christ’s burial.  I look forward to tuning in once again  … and trust your listeners will too.

In the weeks following Easter, we’ll hear another one of John’s most popular studies in his 50 years of preaching called, Mastering Your Money. For more details on all these broadcasts, be sure to download the program tool kit here.

It’s our hope the messages this month will bring comfort and encouragement to all who hear–no matter where they are in their Christian walk.

Grateful for you and the partnership shared with Grace to You.