I grew up in Southern California.  I speak Spanish.  (At least I speak the kind you learn by taking four years of Spanish 101.  “Donde esta la biblioteca” is about as far as it goes.)  Virtually every day of my life, I’ve had encounters with Spanish-speakers.

Consequently, it’s not unusual to meet someone who has the name “Jesus.”  Could be on a nametag, could be someone in customer service, or it could be on a receipt like it is here.  But, of course, most of the time, it’s not pronounced as we might naturally think—like those of us who were raised in the Christian world. Whenever I see the name Jesus connected to someone I meet, I confess I have to stop and think about how to pronounce their name properly.  That’s the least I can do! 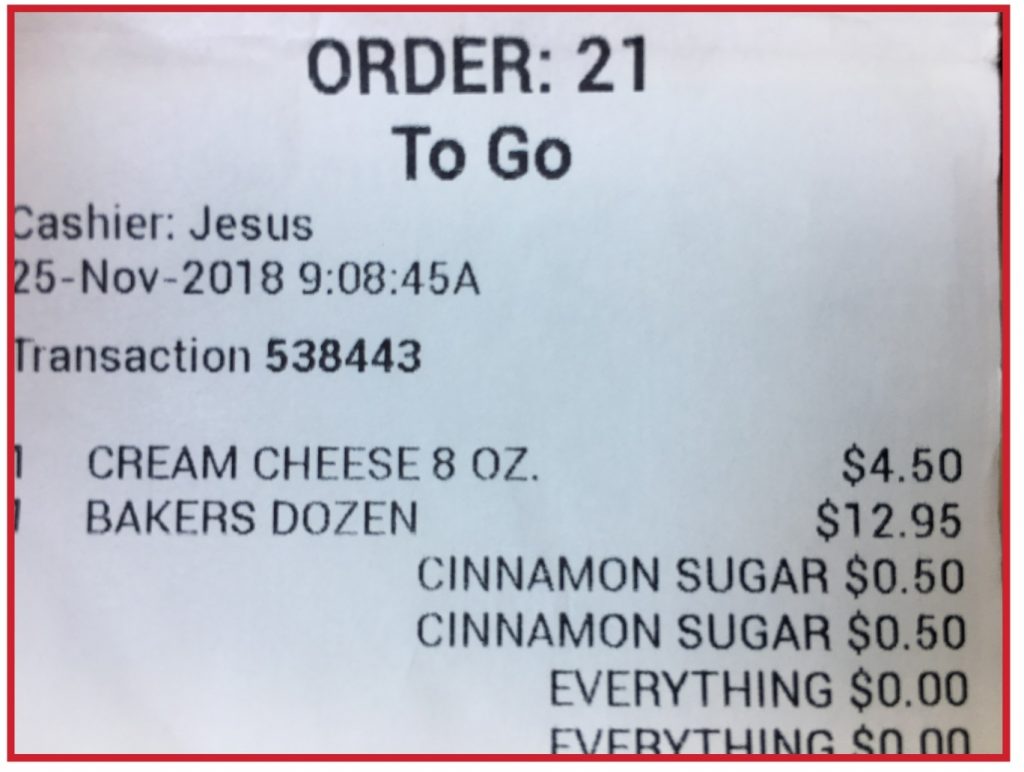 This time, frankly, seeing the name on a receipt drew me short for a second.  I’d just purchased a baker’s dozen at a local bagel store.  The server was very gracious and helpful.  (FWIW, the bagels were awesome.)

But seeing the receipt got me to thinking.  Did I treat the man behind the counter as though he WAS the Jesus I call by first name?  …the one in whose name I pray?  …the one whose coming to earth we celebrate this time of the year?

This is probably borderline sacrilegious, but I wondered to myself, would I have tipped differently if the King of Kings was behind the counter?  Would I have engaged him in a friendlier way?

No doubt I would.

HIS name, the server’s name, was Jesus.  But ironically I bear the same name to those who don’t know HIM!  As a believer, so do you.  Though our “Christian” nametag isn’t visible, our kindness, our selflessness, our grace, our love are just as obvious as a badge with “Jesus” on it.  Christ told us our love would be our badge of honor…how people would know we’re His disciples.

So especially at this time of the year, let’s be Christ’s ambassador.  Every encounter.  Every smile.  Every time I linger to hold the door open, or allow someone to take the last parking spot.  I’m a representative.  The fact is, I DO have a name tag that says “Jesus.”

But am I wearing it well?

I hope so!  It’s a great reminder!  And, as Charles Morris says each day on Haven, “It’s ALL about Jesus.”

In a very real sense, for you and me, he’s exactly right.  And I’m proud to bear that name.