This is probably the last place where I should muse about bathroom signs, but several have disturbed me recently.

I’ve always been bothered by fancy foreign restaurants where the privy doors use some foreign word or ornate and unreadable script to describe “men” and “women.”  I just don’t think restaurants should force you to figure out a word puzzle before using their facilities.  You don’t need to be fancy when it comes to the perfunctory parts of life.  Just spell it out plain.  Men.  Women.  That seems logical to me.  Why do you cleverly disguise the WC?

For example, I walk into a Greek restaurant in a Minneapolis suburb.  Am I really supposed to know whether to go through the “γυναίκες” door or the “άνδρες”?  How about a little help here.   We’re in the United States for crying out loud.  It’s all Greek to me.

On the other hand, if you’re vacationing in Mexico, of course you should expect the baño doors to say “hombres” and “mujeres.”  Or, alternatively, “chicos” and “chicas.”  (Even I, after four years of Spanish in high school, know words ending in “o” are masculine, those ending in “a” are feminine.)  The principal is, whatever the culture, keep it simple and legible!

Which brings me to the subject at hand. 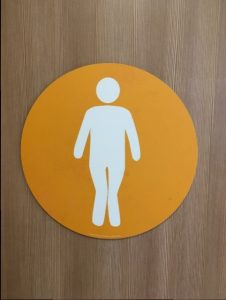 ood old “standard” restroom signs are changing.  I ran into three in the last month which caught my eye. 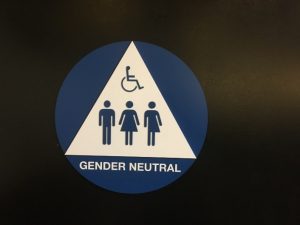 There’s this one which was on the men’s room of a fast food “restaurant.”  I’m not sure what it means exactly, and I’m not going to venture a guess except to say some degree of urgency may have been involved.

Suffice it to say, I assumed it was the gentlemen’s door.  And, I’m pretty sure I was right (at least no one screamed when I entered).

Then there was this sign which I’ve noted is increasingly common.  I know it’s supposed to be gender neutral.  But that person on the right—the one with half a dress—still looks a bit odd to me.  Or at the very least, awkward.

Then, this week, I saw this third restroom sign. It was in a medical office building.  That’s the placard that really caught my attention and got me thinking.

It specifically signals that this facility is for “all” genders.  Not “either gender.”  Not “women.”  Not “men.”  “All genders.” 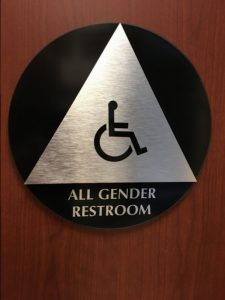 Among the exhaustive list of genders you might choose, take your pick.  All will be welcomed.  It’s your preference after all.

That sign was a reminder to me we’re being increasingly pressured to view gender as a selection.  A preference.  Something you feel like rather than what you are. 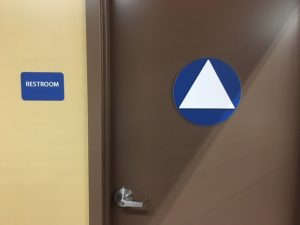 It’s as though your maleness or femaleness was a matter of, say, taste in ice cream or your favorite color.  Maybe it stays the same through your life, maybe it changes.  It’s fluid.  This week I’ll be a man.  Next week I think I’ll be androgynous.  After that, who knows?

That mindset is even further illustrated in this bare sign.  It’s as if it screams, “Fill in the blank.”

Now, I know there are extreme and rare examples of those who were born having the characteristics of both sexes.  I cannot imagine the agonizing decisions parents of hermaphrodite children must face.  I acknowledge that.

However, I tend to favor the clear division of God’s design for mankind: men and women.  Hommes or femmes.  Männer or Frau.  You’re one or the other, and that’s not changeable.  You may choose to live as though that were not the case, but the inextricable fact is that you were created as one or the other.  (I know many of my friends will disagree, but that’s OK.  My reference source has been around for a few thousand years and the author of that manual knows a thing or two about the matter.)  Making such a statement is often interpreted as hate speech even though my opinion has nothing to do with whether I love and accept someone with a different perspective or lifestyle choice.

Well as I mulled on this cultural shift, it occurred to me: these bathroom emblems really are—literally and figuratively—signs of the times.  They’re sociological barometers, measuring and reporting the tenor and tone of our culture.  They’re dolorimeters of the created world.

The Bible calls these signs “birth pangs.”  Indications that a great upheaval is coming.  They’re signals that we’re inextricably marching toward what appears to be the end of a “Christian” nation, unfortunately, but, at the same time, heading gloriously toward the second coming of our Savior.

If you’re a Christian looking for the return of Christ, you know we shouldn’t be surprised.  Jesus told the disciples there would be many indications that the end is drawing near.  Among them, in Matthew 24, he says,

“…you will be hated by all nations because of My name. At that time many will fall away and will betray one another and hate one another. Many false prophets will arise and will mislead many. Because lawlessness is increased, most people’s love will grow cold.”

The Lord doesn’t mention restroom signs here, but he could have.  So could have the Apostle Paul when he wrote the church in Rome, chapter two:

“For they exchanged the truth of God for a lie, and worshiped and served the creature rather than the Creator.” (Read that: “they exchanged God’s decision for gender for their own personal preference.”)

Ultimately, I’ve landed where Rosario Butterfield directs a response to this question of sexuality and gender preference in her excellent book: The Secret Thoughts of an Unlikely Convert.  She says this isn’t a gender problem.  It’s not a sex issue.  Homosexuality and transgender confusion isn’t where we need to worry.  Nor is the sign on a bathroom.

My sin. Your sin.  That is where our trouble lies.

That universal ailment causes us to rebel against a sovereign God.  THAT is our problem.  Sin has infected every area of every life which cause a myriad of problems.  The signs of our sin are legion.  They subtly confirm our egregious refusal to obey The King.

The Apostle Paul puts together a pretty good list of the signs in our lives…how we respond to God:

And let me be quick to admit, unfortunately, I’m a living illustration of sinful rebellion, to my own shame.

That’s the bad news.  But the good news?  There’s a remedy?  It’s not difficult or complicated.  But for some, very hard to accept.  And it’s found in the person and work of Jesus Christ.

He came to live and die, so that we might die and live.

And while on this earth, he quietly molds us into His image.  As we change, the closer we are to our Heavenly Father.  As we grow, infractions occur with less and less frequency.  Along the way, just as the sculptor mashes and pinches and pulls and pokes the clay, God shapes our lives into conformity.  Our disobedience begins to diminish, with knowledge that one day, it will be completely extinguished.

Every day on Haven, Charles Morris says, “It’s all about Jesus.”  He’s the only panacea to our problem!  The Lord’s Son is God’s sign to us that says, “There’s hope.”

Charles is talking this week on Haven about “preaching the gospel to yourself.”  It’s this very process we know as salvation and sanctification.  It’s confirming God’s love for us, through Scripture.  It’s confirmed by the historical work of Jesus Christ.

We can live today without regard for the cultural signs around us, knowing our eternity is secure.  We know Jesus bore the wrath of God on our behalf.  And in exchange, we’ve been given perfect righteousness.

That my friend, results in the most encouraging sign of all …